As gifts are wrapped this holiday season, we are also mindful that operationally AC Transit is wrapping-up the final days of 2019. A year that has been both memorable and momentous.

Our much-anticipated Bus Rapid Transit Project (BRT) took distinguishable shape this year. BRT is now not only nearing 90 percent complete, but passenger service is also scheduled to begin in March 2020.

For BRT riders, this season of giving will continue well beyond the New Year. AC Transit is offering FREE FARES during the first 90 DAYS of BRT’s operation. The “Free Fare” offer is a sincere thank you to East Bay communities for  the collective support during construction.

Finally, with such a transformative year nearing its end, we thought it fitting to assemble a look back at the asphalt, concrete, and steel milestones along BRT’s road to reality. 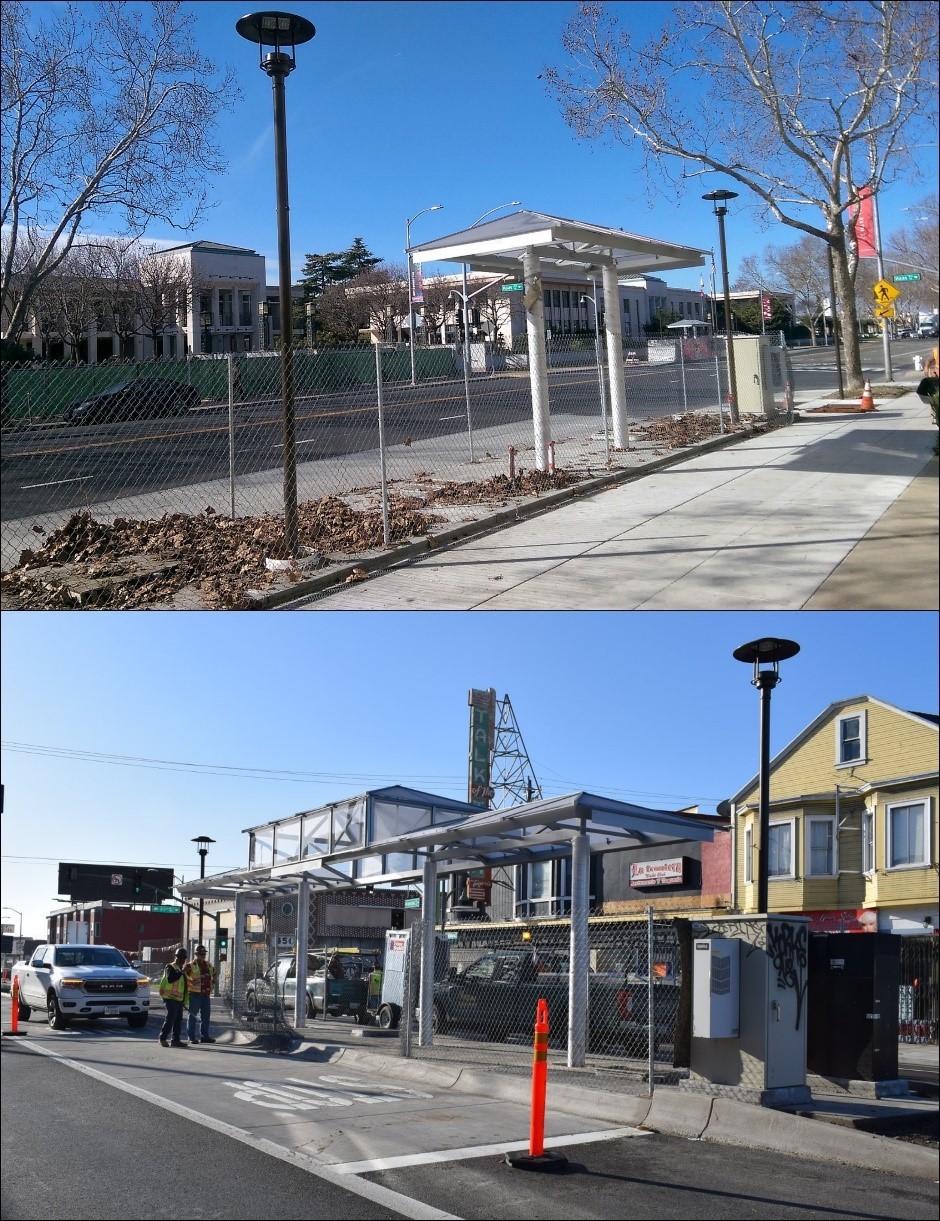 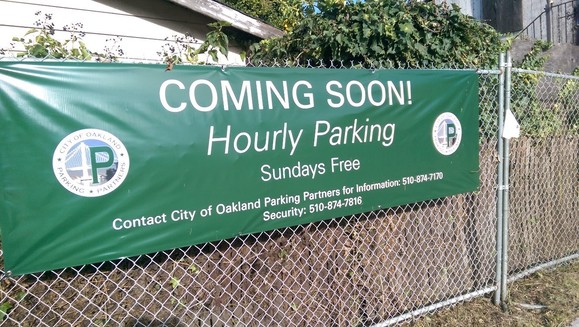 March – Major construction begins in Oakland’s Fruitvale neighborhood. New curb ramps and bus stations will be built; modern lighting and traffic signals will be installed; and nearly 9.5 miles of International Boulevard will be repaved. New traffic lanes and high-visibility crosswalks will foster safer travel for motorists, cyclists, and pedestrians. The BRT corridor will also be beautified by the planting of more than 60 trees between Fruitvale and 42nd Avenues. 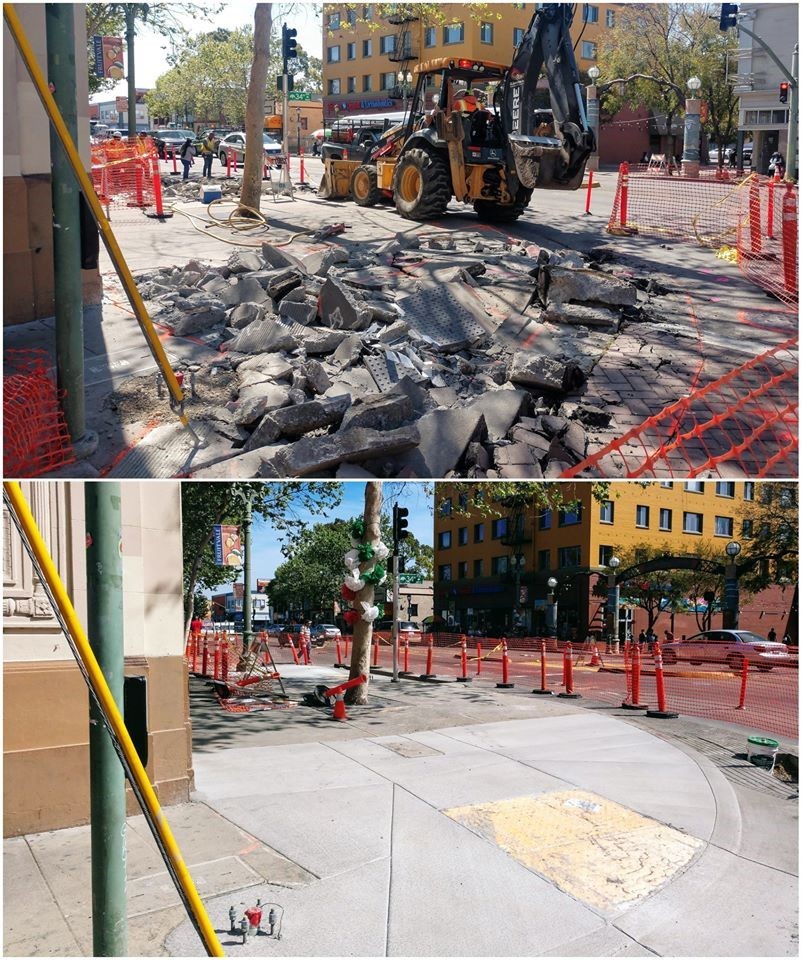 Of BRT’s many advanced designs, accessibility is a central element. Level boarding was prioritized, which ensures no encumbrances between station platforms and BRT bus floors for riders using mobility devices, strollers, or bicycles. 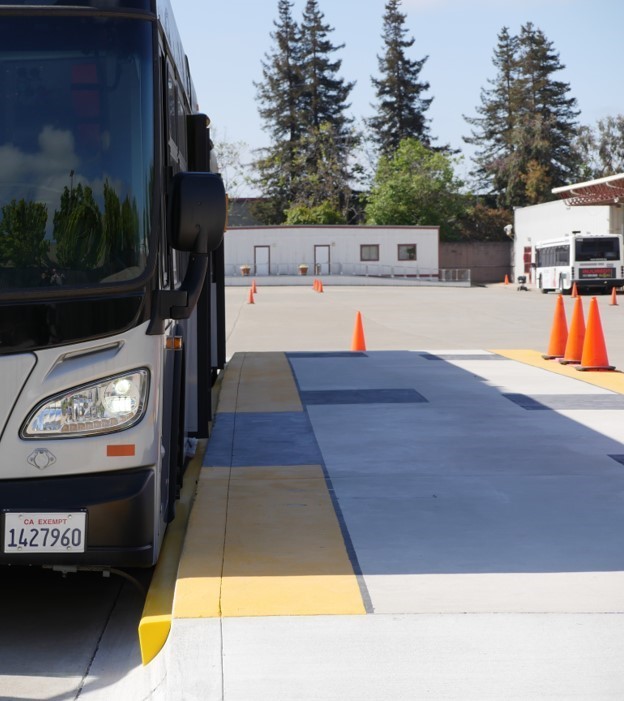 May – In support of National Small Business Week, the BRT project highlighted several businesses along the International Boulevard corridor via social media and partnered with the City of Oakland to host a small business workshop at the Fruitvale based BRT Information Center. During the “Information Technology Tools for Your Business” workshop, local merchants learned how to leverage websites, online tools and other technology to manage various aspects of their business from finances and marketing to sales and everyday organization. 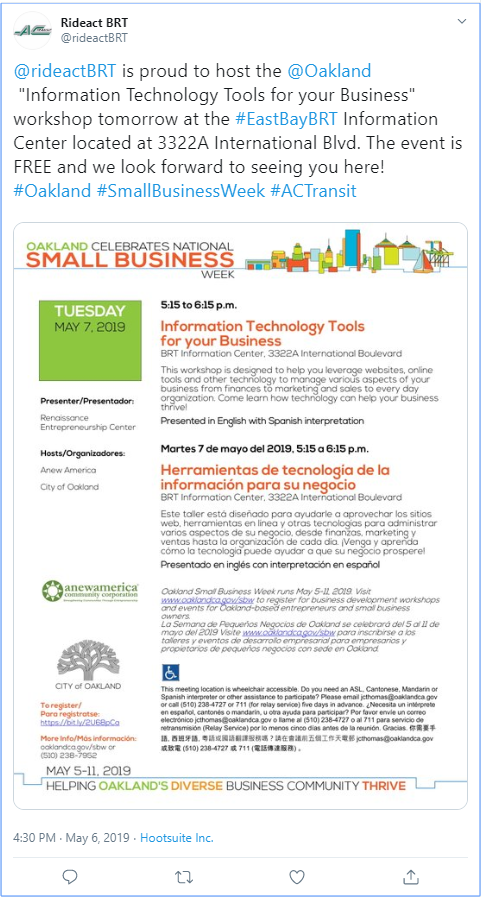 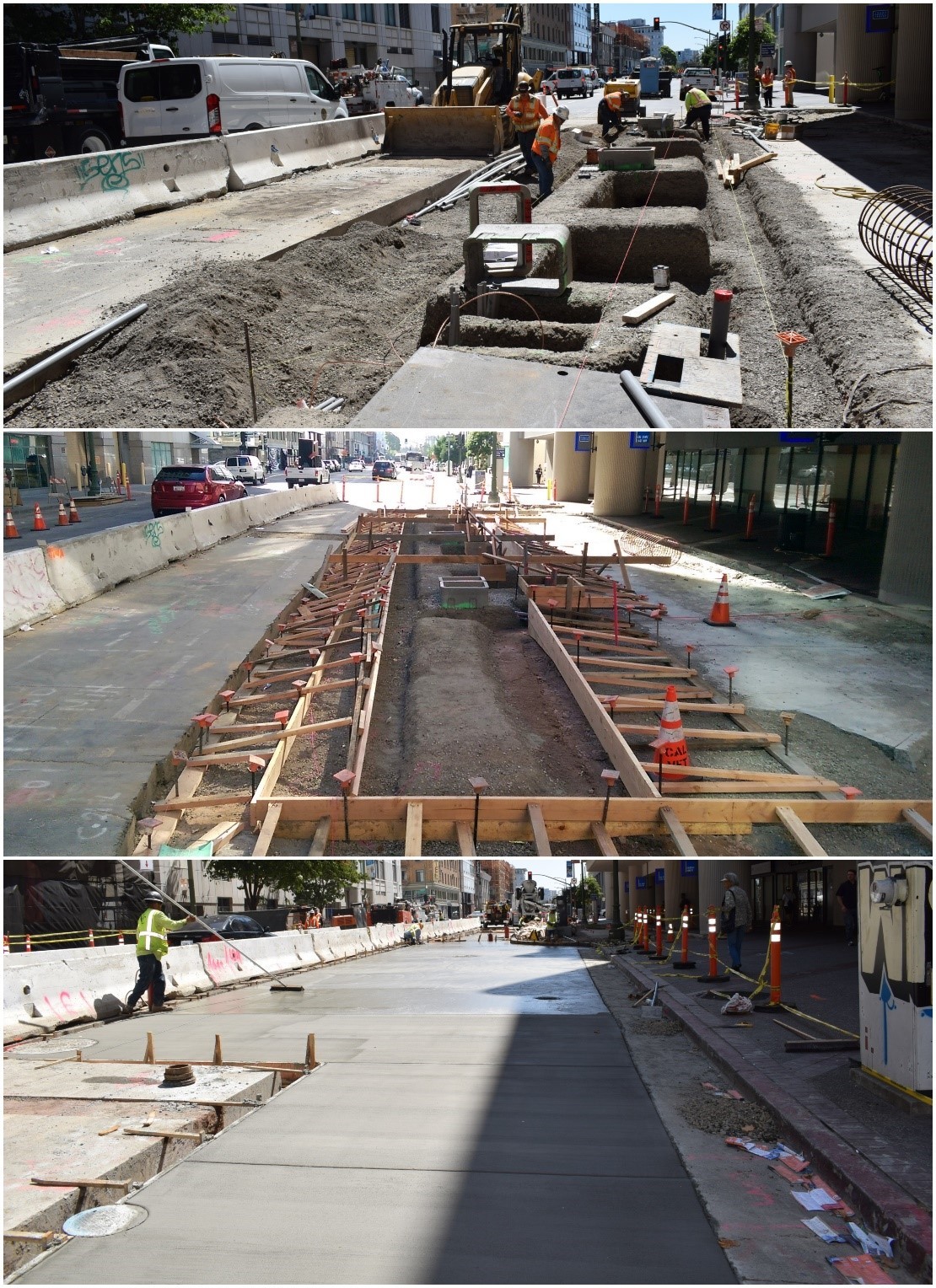 July – By Independence Day, the project is 70% complete. As the temperature heats up in the East Bay, so does construction of BRT’s San Leandro Transit Center (SLTC), located at the site of the existing San Leandro BART station. 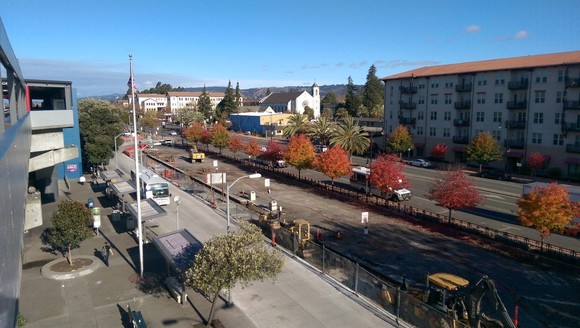 August – Construction of BRT’s forecasted busiest stations begins on Broadway in Downtown Oakland. The stations at 19th and 14th Streets are estimated to serve 1,400 and over 1,600 riders, respectively, each week day. The bustle of these stations will be covered by 48-foot canopies, the largest design in the network. 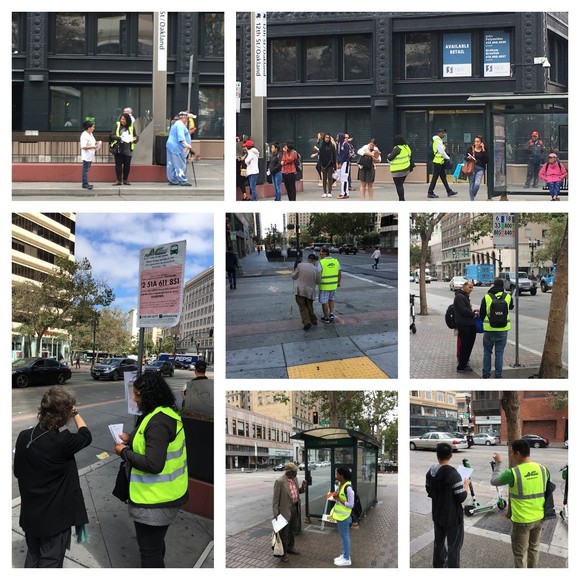 In advance of training, the Outreach Team canvassed the corridor educating stakeholders on illegally-parked vehicles, keeping the 24-hour transit-only lane clear, and the potential for ticketing and towing. 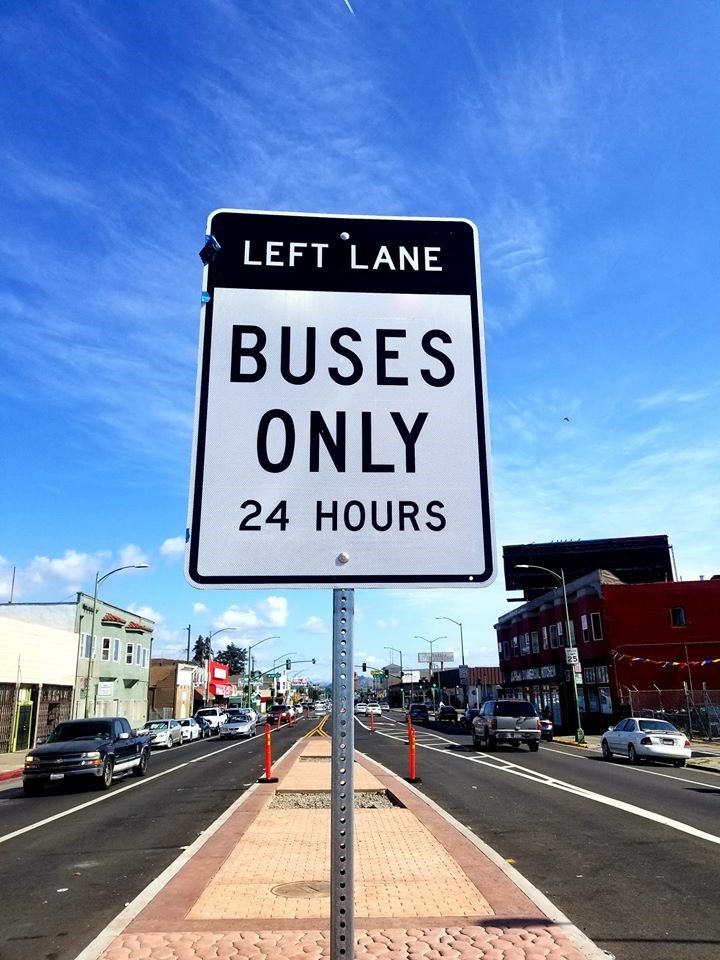 October – By the close of October, construction is 85 percent complete and the repaving of International Boulevard between 2nd Avenue and Havenscourt Boulevard is officially underway. 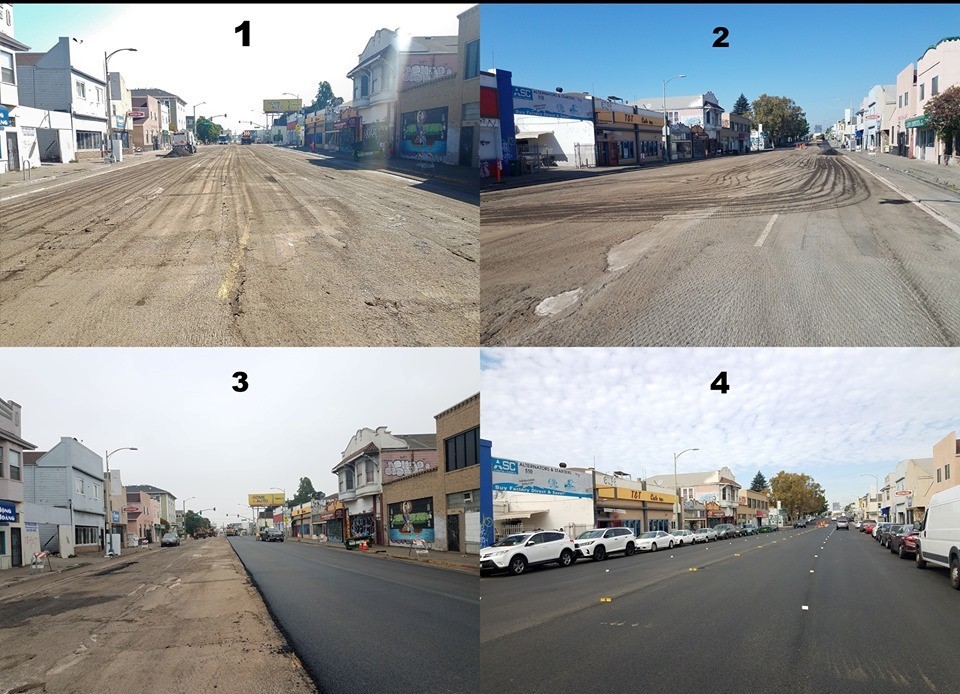 (1) Several inches of deteriorating asphalt were ground from International Boulevard.  (2) Street sweepers removed loose debris and a “tack coat” was applied to help the new pavement adhere to the underlying surface.  (3) New asphalt designed to last up to 20 years is installed on International Boulevard.  (4) Motorists enjoy a smoother, safer ride to homes and businesses.

Throughout the repaving process, BRT’s Outreach Team visited residents, businesses, and schools to keep them abreast of advances and prevent ticketing and towing.

November – While residents throughout the BRT corridor gathered to give thanks, BRT construction reached yet another project milestone: installation of high-visibility crosswalks, new vehicle and bicycle lanes, and passenger and merchant loading zones. 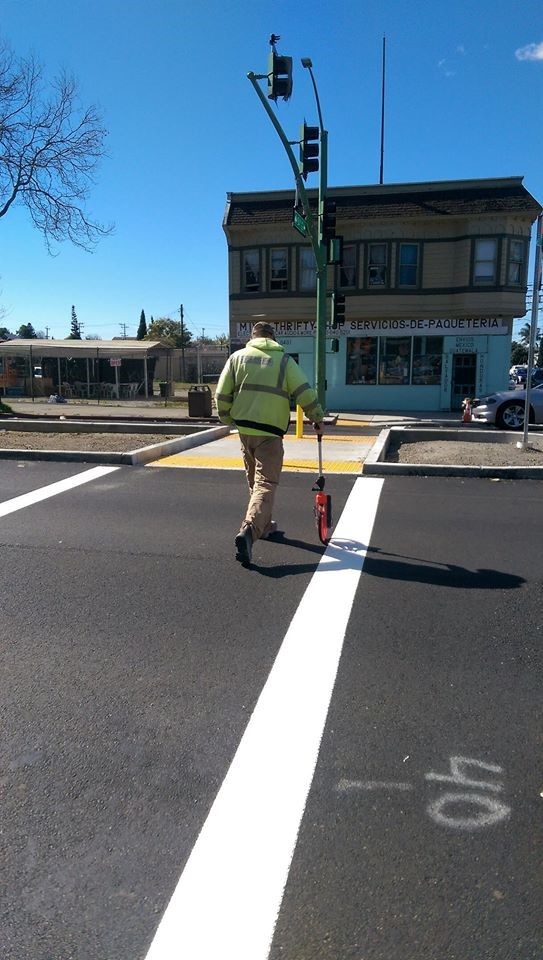 Every year, The Unity Council’s Día de los Muertos festival draws over 100,000 people to Oakland’s Fruitvale neighborhood for a cultural celebration of life and to honor those who have passed.  The festival is the Fruitvale community’s signature event. As a result, the BRT construction team accelerated the completion of major construction to ensure that the heritage, excitement, and entertainment of Día de los Muertos continued without disruption. 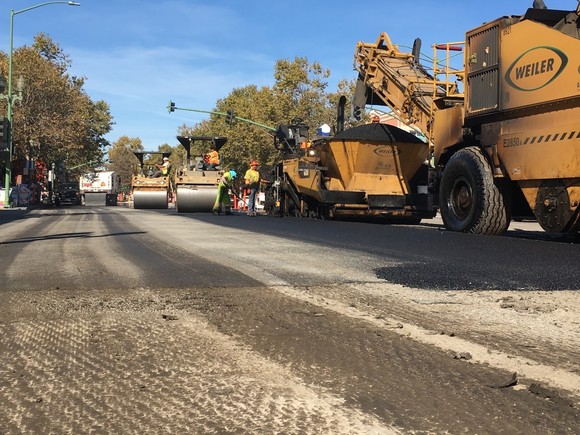 Crews worked 10-hour days, six days a week, to build BRT stations at 34th and 39th Avenues.  In some instances, crews worked through the night, reconstructing parts of the International Boulevard and Fruitvale Avenue intersection to minimize impacts to traffic, residents, and local businesses.  When two potentially dangerous sinkholes were discovered at 38th and 39th Avenues, crews quickly mobilized to repair the leaking sewer lines that had caused the damage, fill the voids, and make the area safe.  Finally, after the new stations, curb ramps, and medians were built, a fresh layer of asphalt was installed on International Boulevard between the Fruitvale intersection and 42nd Avenue.  The herculean effort to complete construction in the Fruitvale before Dia de los Muertos ensured that festival-goers were able to enjoy the pageantry of the day on a smooth and safe new street. 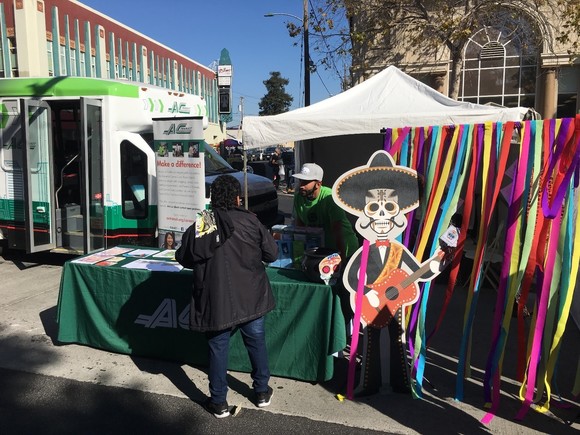 Virtually all of International Boulevard between Oakland’s Eastlake neighborhood and the San Leandro border has now been repaved and new roadway striping has made streets safer and more accessible for everybody.

As BRT transitions from construction to launch in early 2020, AC Transit will now focus on safe usage of BRT for riders, as well as cyclists and motorists that share use of the corridor.

As we all await BRT’s completion, AC Transit wishes each of you the Happiest of Holidays and a prosperous New Year.